THE Biggest Collegiate Trademark News This Year: How Ohio State University Trademarked THE 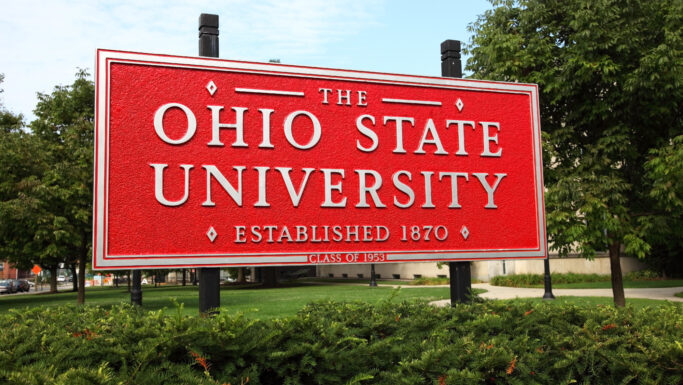 On June 21, 2022, after a nearly three-year long application process, The Ohio State University registered the trademark THE. The registration of the simple three-letter word has sparked controversy, several internet jokes, and a lot of questions.

How can any single entity trademark one of the, if not the most, common words in the English language? To answer that question, we need to go back to August 12, 2019 when Ohio State filed its application for THE to be used in connection with “clothing, namely, t-shirts, baseball caps and hats,” in Class 25.

The United States Patent and Trademark Office almost immediately refused the application, citing two reasons: (1) there was a prior existing application for the mark THE, for use in connection with apparel, filed by fashion mogul Marc Jacobs; and (2) based on the specimen (evidence produced showing use of the mark in commerce), Ohio State’s use of THE was “merely ornamental.” Clearly, Ohio State was facing an uphill battle.

Once that hurdle was cleared, Ohio State still had to reckon with the USPTO’s contention that its use of THE was “merely ornamental.” In order to function as a trademark, a mark must indicate the source of the goods or services. When words or designs are used on t-shirts, or other apparel, the USPTO must determine whether these symbols are solely decorative (i.e.,ornamentation) or also serve as a trademark indicating a source.

Ohio State’s problem was that its initial proof of use did not clearly indicate that the university was the source of the apparel:

This led the USPTO to refuse registration because it was unclear whether THE was functioning only as ornamentation or also as a source indicator. Ohio State, not willing to give up, re-branded accordingly and began using THE as a very clear source indicator:

After overcoming this final hurdle, the mark was published for opposition and subsequently registered as a federal trademark.

While Ohio State’s road to success is an interesting look into the twists and turns of certain trademark applications, some broader questions remain. Why would Ohio State want to trademark THE in the first place? What does this say about universities and trademarks in general?

Interestingly, Ohio State was the first known school to file trademark applications for its name and its mascot (the Buckeye). It also implemented one of the first collegiate licensing programs in 1974. In 1986, a new university logo was introduced in the hopes of moving away from the “OSU” symbol, which had been used since 1977.

The change was said to “reflect the national stature of the institution,” which might be diminished by use of an acronym that could also signify Oregon State University and Oklahoma State University. In fact, the name “The Ohio State University” dated back nearly one hundred years prior when in 1878 the university, through state legislation, officially changed its name from the “Ohio Agricultural and Mechanical College.”

The university has been persistent ever since in using the definite article at the start of its name, in contrast to the practice of other state universities.

This nearly 100-year gap in branding focus can likely be explained by looking at the broader history of universities and trademarks. In 1984, the Supreme Court reached a landmark decision in National Collegiate Athletic Ass’n v. Bd. Of Regents of Univ of Oklahoma, ruling that the NCAA’s television policy of restricting national broadcasts to one collegiate football game per week violated the Sherman Antitrust Act.

The decision opened the door to individual universities and conferences negotiating their own contracts, which led to a sharp increase in nationally televised football games. Spurred by this exponential growth in the popularity of college sports due to the “television boom” of the 1980s, universities began to realize the potential of exercising their intellectual property rights. See Katie Diem, The Business of School Spirit, 245 Mississippi Sports Law Review 247 (2016).

With this surge, universities began to test the magnitude and reach of their trademark rights. Notably, in 2008, the Fifth Circuit held that a university’s color scheme, combined with other identifying indicia, was entitled to trademark protection, thus allowing universities to block certain unlicensed uses of their color schemes on products. Board of Supervisors for Louisiana State University Agricultural and Mechanical College v. Smack Apparel Co. Years earlier, a federal district court in Arkansas held that if there were the “smallest likelihood of confusion” as to the affiliation between an alleged infringer and a university, courts should rule in favor of the university. Bd. Of Trs. Of Univ. of Ark v. Prof’l Therapy Servs., Inc. (1995).

Given this broad scope of protection, universities have had to learn how to balance protecting their trademarks (because failing to enforce can mean loss of rights) and fostering the fan base and camaraderie created through collegiate athletics. Universities need to avoid being perceived as overly aggressive in policing their marks.

By seeking federal trademark registration, universities position themselves to protect their intellectual property while promoting the esprit de corps that only collegiate affiliation can instill. As collegiate sports continue to grow in popularity, universities would be wise to take a page from The Ohio State University playbook – protect first and enforce (if appropriate) later.