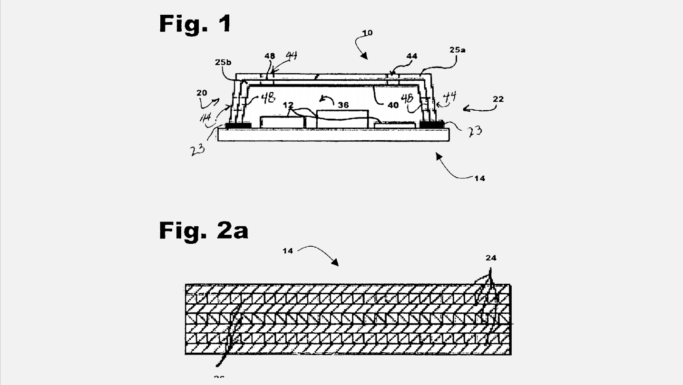 Almost a decade ago, Sunstein partner Steven Saunders uncovered the Halteren international patent publication describing a flexible transducer assembly. This technology was the subject of Knowles Electronics’ US Patent No. 6,781,231(“the ’231 patent”) which was being asserted against our client in federal district court and the International Trade Commission (ITC).

Steve recognized the value of the Halteren reference as prior art that could invalidate the significant patent claims of the ’231 patent. Steve and I prepared a request for inter partes reexamination against the ’231 patent in October 2009. In less than two months, the U.S. Patent and Trademark Office (PTO) rejected the significant claims 1-4 over Halteren, thereby initiating the reexamination.

Knowles responded to the rejection by adding additional claims and arguing against the pending rejections. In our comments, we pointed out that Halteren anticipated these newly added claims as well.

Meanwhile, Knowles was asserting the ’231 patent against many competitors. The war engendered by this patent was proliferating. Two more competitors followed our lead and piled on with their own requests for inter partes reexamination. In December 2010, the PTO merged all three reexaminations and issued another comprehensive office action with rejections of the pertinent patent claims and the new claims.

After gathering comments from the patent owner and the requesters, the PTO issued another non-final rejection of the claims 1-4 and the added claims 23-27 in October 2011.

In January 2012, we filed a response, pointing out that a claim construction ruling in the co-pending ITC proceeding was not binding on the PTO, citing In re Trans Texas Holdings Corp., 498 F. 3d 1290 (Fed. Cir. 2007). We addressed Knowles’s revised attempt at further narrowing its claim through a claim construction of “package.” After receiving all comments, the PTO issued yet another non-final rejection of the claims.

Responding to our attacks on new claims 23-27, Knowles amended the claims further to include a solder reflow capability on the solder pads of the package. We filed our comments on Knowles’s newly amended claims. We objected to the use of “solder reflow process” and “rigid” substrate in the claims as unsupported in the original patent. We reinforced the examiner’s view toward the rejection of the claims on the basis of Halteren and other prior art.

While waiting for the examiner to take action, in early 2013, the heavily litigated dispute between Knowles and our client was settled. Although over three years had elapsed since we filed the reexamination, we still did not have a final ruling.

The case carried on without us. It wasn’t until September 2013 that the claims were finally rejected in an Action Closing Prosecution (ACP). The ACP was 142 pages long, detailing the decision as to the numerous claim rejections that had been proposed by the parties . The patent owner and remaining parties commented.

Knowles continued the vigorous defense of its patent. An appeal was taken to the Patent Trial and Appeals Board. A hearing was held in July 2015 and the Board’s decision issued in September 2015. The Board remarked that claims 1-4 and 23-27 stood rejected by the examiner over approximately 39 combinations of multiple prior art references. The examiner had also rejected the added claims 23-27 for improperly seeking to broaden the scope of the claims and for an inadequate written description in the patent.

The Board reversed the scope-broadening rejection, but affirmed the rejection of inadequate support in the patent for the term “solder reflow process” as added into the new claims 23-27. Rather than dig into all of the art rejections, the PTAB agreed to a broadest reasonable construction of the term “package” and cited Trans Texas Holdings for the proposition that it was not bound by a district court claim construction. The Board thus affirmed the rejection of claims 1-4 on the basis of Halteren.

The rejection of the claims was still not final. Knowles appealed the PTAB decision up to the Federal Circuit of Appeals.

The Federal Circuit just issued its opinion on March 1, 2018, eight and one-half years since we filed our request subjecting the ’231 patent to reexamination over the Halteren reference. The rejections for lack of support and anticipation by Halteren were affirmed.

So under normal circumstances, the review takes a total of about a year and a half before the PTAB and another year or two before the Federal Circuit. The strict timelines in the PTAB are generally enforced even when multiple petitions are filed against a patent.

Despite complaints that have been raised against procedural fairness of various aspects of inter partes reviews, these new proceedings have nevertheless delivered on a promise of speed to final decision.