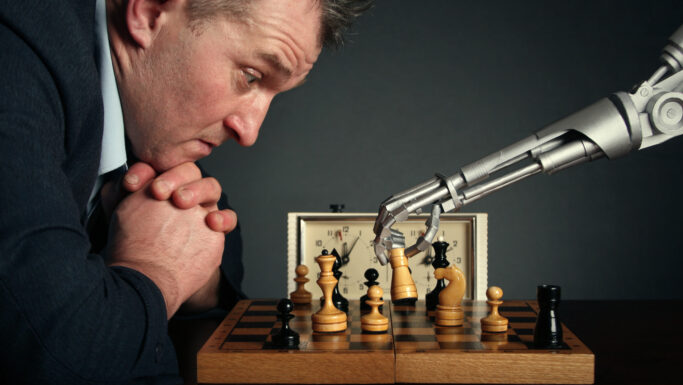 The United States Patent and Trademark Office (USPTO) published a decision on April 22 that a machine cannot be named an inventor for a patent, because inventorship is limited to a natural person. That the question was even raised may be a harbinger that the age of human dominance is waning, while the age of Artificial Intelligence (AI) machines is just beginning.

In filing an application for a U.S. patent, Stephen L. Thaler, in collaboration with the Artificial Inventor Project, a team of intellectual property attorneys, listed “DABUS,” an AI machine, as sole inventor. As this was the first time in the U.S. that a machine was so designated, much hoopla ensued.

Thaler, listed as applicant on the application, is the founder and CEO of Imagination Engines, Inc., and holds a number of patents pertaining to AI and the DABUS machine. He expects his novel AI techniques to be applicable to every aspect of human endeavor, not only in technology but in a wide variety of fields such as the arts, music and entertainment.

The USPTO responded to the application with a Notice to File Missing Parts, asserting that the application did not identify an inventor. Thaler asked for supervisory review in an attempt to vacate the Notice. That petition was denied, so Thaler requested reconsideration.

In arguing that the Notice should be vacated, Thaler described DABUS as a “creativity machine” that uses neural networks trained with general information in a field of invention to independently create the invention.

He added that DABUS was not created to solve any particular problem or trained with any special data relevant to the invention. Indeed, DABUS, not a person, recognized the novelty of the invention, so naming the machine as the inventor was proper. Inventorship, argued Thaler, need not be limited to natural persons.

The USPTO denied the petition. Broadly interpreting “inventor” to encompass machines, it said, would contradict the patent statutes that refer to inventors as persons and individuals. The USPTO relied on several Federal Circuit cases—and its own Manual of Patent of Patent Examining Procedures--to conclude that conception, the touchstone of inventorship, is a “formation in the mind of the inventor” and a “mental act,” that must be performed by a natural person.

Thaler contended that since patents related to the DABUS machine had issued, the USPTO had implicitly recognized the process by which DABUS invents. The USPTO said no: “The granting of a patent … for an invention that covers a machine does not mean that the patent statutes provide for that machine to be listed as an inventor in another patent application--any more than a patent for a camera allows the camera to hold a copyright.”

Thaler also argued that blocking the listing of a machine as an inventor would compel applicants to name a natural person even though that person did not meet the inventorship criteria. The USPTO answered that such policy-based arguments “do not overcome the plain meaning of patent laws as passed by Congress and interpreted by the courts.”

Just as many would never have predicted the events now occurring in our country, I would wager that few could have foreseen the rapid advance of the present AI revolution, with all its attendant dangers and benefits. The USPTO’s resistance represents only the beginning of man’s effort to forestall the inevitable.