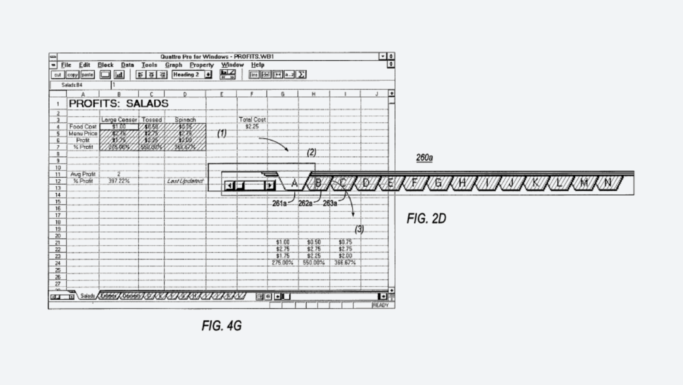 In Data Engine Technologies LLC v. Google LLC, holding patent-eligible a spreadsheet provided with tabs to facilitate navigation, the Federal Circuit continued, in late 2018, to refine the law of patent eligibility of computer software. A parade of decisions from the federal trial courts and the Patent and Trademark Office relating to patent eligibility, and, more often than not, patent ineligibility, has provided the Federal Circuit with a stream of cases that raise questions about what kinds of software can be patented.

These cases arise in the wake of the Supreme Court’s questionable 2014 decision in Alice Corp. v. CLS Bank, discussed here, which held patent-ineligible (because directed to an unpatentable “abstract idea”) computer software for an intermediated settlement system. The Alice decision prescribes a two-step test for patent eligibility: first, are the patent claims directed to a patent-ineligible abstract idea?—and, second, if so, do the patent claims fail to define subject matter that amounts to “significantly more” than the abstract idea? If the answers to both questions are “yes,” then the claimed subject matter is not eligible to be patented.

The Federal Circuit, like all courts below the Supreme Court, is bound by the Supreme Court’s precedent, and therefore has the unenviable task of figuring out what the Alice decision means when it handles an appeal involving patent eligibility of computer software. Given this charter, the Federal Circuit has, against great odds, developed a useful jurisprudence of patent eligibility for computer software.

By way of background, the Federal Circuit held in 2016, in Microsoft v. Enfish, discussed here, that patent claims directed to storing data in a novel self-referential table define subject matter that constitutes “an improvement to computer functionality itself” and therefore is patent-eligible under Alice step one and not an abstract idea. Next, in Core Wireless Licensing S.A.R.L. v. LG Electronics, Inc., discussed here, the Federal Circuit held that claims to a user interface, particularly useful for devices like smart phones that have limited screen real estate, define subject matter that is patent-eligible under Alice step one because “these claims recite a specific improvement over prior systems, resulting in an improved user interface for electronic devices.”

The decision in Data Engine Technologies LLC v. Google LLC was also handled under Alice step one. Although the use of tabs to navigate through a spreadsheet has become commonplace, this usage was apparently introduced in the patents that are the subject of the litigation, which claim priority to April 1992. Citing precedent, including Core Wireless, the Federal Circuit held that the claimed subject matter is directed to an improvement in the operation of computers and not to an abstract idea: “Moreover, akin to the claims in Core Wireless, claim 12 recites a “specific” and “particular” manner of navigating a three-dimensional spreadsheet that improves the efficient functioning of computers.”

The Federal Circuit deflected efforts of defendant Google to argue that the claims are directed to the abstract idea of “methods of organizing and presenting information.” Google offered the further argument that there is nothing special about using a notebook tabs to organize content.

The Federal Circuit provided an engaging rebuttal to this position, as follows:

“Google avers that humans have long used tabs to organize information. It cites tabbed notebooks, binder dividers, file folders, and sticky Post-it notes as well known examples of organizing information using tabs. We agree that tabs existed outside the context of electronic spreadsheets prior to the claimed invention. It is not enough, however, to merely trace the invention to some real-world analogy. The eligibility question is not whether anyone has ever used tabs to organize information. That question is reserved for §§ 102 and 103 [standards for novelty and nonobviousness of inventions]. The question of abstraction is whether the claim is “directed to” the abstract idea itself…. . Google fails to appreciate the functional improvement achieved by the specifically recited notebook tabs in the claimed methods. …. The tabs are not merely labeled buttons or other generic icons. …. Rather, the notebook tabs are specific structures within the three-dimensional spreadsheet environment that allow a user to avoid the burdensome task of navigating through spreadsheets in separate windows using arbitrary commands.”

In Ancora Technologies, Inc. v. HTC America, Inc., decided in November 2018, the Federal Circuit again found software to be patent eligible under Alice step one. That case involved a method for preventing a computer from running unauthorized software. The method involves storing a key for the computer in the computer’s Basic Input Output System (BIOS) module (a novel location for such a key), where it cannot be removed or modified by the user.

Citing its precedents, including Enfish, Core Wireless, and Data Engine Technologies, the Federal Circuit held that the claimed subject matter is not abstract and is patent-eligible: “Improving security—here, against a computer’s unauthorized use of a program—can be a non-abstract computer-functionality improvement if done by a specific technique that departs from earlier approaches to solve a specific computer problem.”

With its decisions in Ancora Technologies and Data Engine Technologies, the Federal Circuit has expanded the scope of subject matter that is patent-eligible under Alice step one. A growing list of software applications is now considered to constitute patent-eligible improvements in functionality of computers, either by providing a novel user interface, as in Data Engine Technologies and Core Wireless or by providing other functionality, such as improved security, as in Ancora Technologies. That is good news for software innovation.